“The Art of Breaking” – by Master Drew Serrano

The Art of Breaking, or “Tameshiwari”, is a part of many Martial Arts styles across the World (Karate, Tang Soo Do, Kun Tao, and Tae Kwon Do to name a few). It has gained more exposure through organizations such as the World Breaking Association and the United States Breaking Association, and through televised competitions such as ESPN2’s coverage of the US Open World Martial Arts Championships. Breaking has taken center stage on informative programming such as Discovery Channel’s “Time Warp” and “Xtreme Martial Arts”, and National Geographic Channel’s “Fight Science”. It has also become the topic of various Talk and Variety shows. The inclusion of breaking competitions at many Martial Arts’ venues has increased the interest in breaking and has opened the doors for new competitors of all ages, ranks, and genders. It is becoming increasingly more popular as a way to test the progression of technique and focus. The general public’s appreciation is also growing, even though many view it as a spectacle. So what is the purpose behind the destruction of these varied inanimate objects?

Throughout the history of Martial Arts, or any system of combat, there have always been limits to the extent at which some techniques or theories could be practiced and tested safely. Although an instructor can teach techniques, focus, and “Chi” or “Ki”, the true essence of many Martial Arts’ styles is not realized until the presence of an actual real life situation where there are no limits put on the areas trained. With this in mind, there are only a limited number of ways to test the practicality of techniques and concepts learned through some Martial Arts styles.

A practitioner could be put in a situation where his/her training is used in actual combat through organized combative sports or a life-threatening event. In both of these scenarios one or more of the participants are very likely to get hurt, and the person inflicting the injury has to live with the consequences of their actions. In many styles this is not conducive to the “martial way of life”. This is not to say that some of us, as Martial Artists, do not train for that one moment in which our training could save our life. If that day comes we hope that it all clicks and we walk away unscathed, but depending on the extent of the situation and the actions we take the traumatic memory of such an incident can scar us for life.

Breaking can provide a way to test the effectiveness and power of a technique without the danger of hurting someone else. This is especially important in the Dojo where our training partners are many times our friends as well. Although there is always a risk of injury to the breaking practitioner, in most cases he or she does not have to worry about hurting anyone else but themselves.

As stated earlier, breaking provides a way of realizing steps of progression in many ways. The first of these steps, the beginner level, is to overcome the natural fear of injury. Even a basic board break presents the possibility of injury if not performed correctly and with the right mindset. Getting over this first hurdle is sometimes the hardest part of breaking. There is a great sense of accomplishment attained. This is also the first step toward the focus of the powerful inner energy called “Ki”.

The next level of breaking, the intermediate level, usually comes with the practitioner increasing the amount of material broken. This comes with increased confidence in the power and effectiveness of the Martial Artists’ abilities. Obviously a greater amount of material requires both more power and mental focus. At this level a practitioner can sometimes power through a break even though they have not tapped into the full potential of their “Ki”. The greatest risk of injury is possible at this level in which a practitioner has the confidence and possibly the physical ability, but is still in the process of being able to channel the energy necessary to protect the body from harm. Instructors must take great care in guiding their students through this level.

As the practitioner continues to train and learn, their abilities increase and they become more in touch with that which makes a great Martial Artist. Mental focus, body awareness, and Martial Art technique become more efficient. With this increase in knowledge and ability comes greater awareness of “Ki” and how it can be focused. This is the advanced level and the practitioner will experience a great increase in their breaking ability. They will be able to attempt harder materials, larger stacks, and more intricate techniques and routines. Even though the practitioner may not be successful at all attempts the incidence of injury is considerably lower than previous levels. The advanced level represents the beginning of truly understanding the power and force that can be generated by the human body. It is quite an awakening for many Martial Arts practitioners.

The last level attained, Master’s level, is true control of “Ki” and the body’s ability to generate power, speed, and force at will. This level is not easily attained and it can take decades to actually “feel” this change, but once it is accomplished it becomes second nature. At this level injury is usually caused by lack of focus more than any other reason. A breaker that reaches this level is often humbled because they realize the true potential of the human body. It is empowering, but at the same time frightening to know what the human body is capable of.

Breaking can be incorporated into any style of Martial Art, either as a competitive endeavor or as a measure of progression. Even the simplest break can provide a great sense of accomplishment. At the highest levels it is an asset that can be utilized throughout a practitioner’s training and life outside the dojo.

Master Drew Serrano
Drew Serrano has been involved in the Martial Arts for over 30 years. He ran his first studio at age 23 when he was appointed to take over the Modern Self-Defense Center, previously the original Rossi Academy of Self-Defense, in the Brooklyn section of Waterbury, CT, by his instructors Master M. Byrnes and the late Grandmaster Joseph Rossi himself. He has since owned his own Martial Arts studio in Waterbury, and is currently involved with Bergamo’s Martial Arts of Naugatuck, The Charland Institute of Karate and Fitness, Amistad Academy Elementary School, Sacred Heart University, Gym Nation, and the Waterbury YMCA on a regular basis. 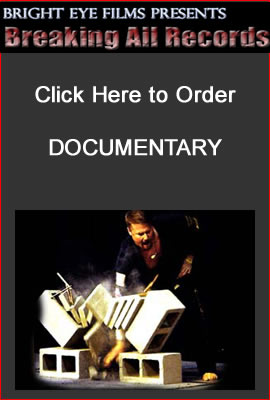